What a weekend...
Over the years I have gotten to do a lot of things, and see a ton of places. However most of the time it has been for competition. It is great to just be able to get away and not have to worry about much of anything.

This last weekend I traveled to Missouri. The trip filled multiple purposes.
1. Spend quality time with my mom
2. Aztec Football at Missouri
3. Get to see family on my mom's side

Before starting my trip I was able to see Sean play Thursday night against San G. Its the first high school football game. I was able to see this year  and it went well. His team got a "W" and he played great!! Our trip started Friday morning at about 4am but our flight didn't leave until 6am. A quick stop in Vegas (no time to play the slots) and we were on our way to St. Louis. Once we arrived we went straight to my grandparents. It was great to see them and just spend time with them.  Later that night I went to my second high school football game of the week.. CBC vs SLUH.. Both all boys schools, which was a little different. Most of my uncles and cousins went to one of these schools.

Saturday was the big day. I started it by running three miles in the humidity. ( If you did not know I am running a half marathon in January with my boyfriend Brennan.. Since I am so competitive I have started my training. Vacation or not have to stay with the plan.)
Then Mom and I went to meet two of her college roommates. Mom really enjoyed it and I heard some funny stories from the past. Sadly I have been sworn to secrecy!! There was also the sharing of pictures, I think I laughed the whole three hours.

From there we left for Columbia Missouri..
I was decked in my Aztec gear ready to watch a great football game..  What an experience it really is a college town so different than in San Diego. 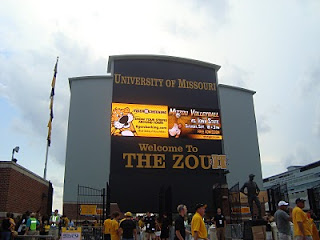 The entrance to the game...

Special thanks to Nik #68 for the tickets. (He is the starting right guard and Brooke's boyfriend) we had tickets with about a 1,000 other Aztec fans. It was soo much fun!! I was surprised that so many Aztec's  had traveled to the game, it was great to see that there are so many people who feel the way I do about Aztec Athletics.. 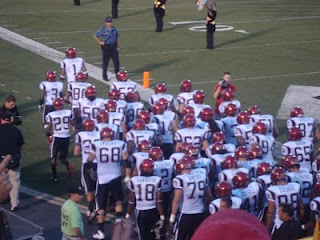 The team coming out of the tunnel for the game... It was go time

I have to say I think many thought the game was an easy W for Missouri but it was not in any way, the Aztecs fought the whole time.  I spent a few plays standing on the bleachers jumping up and down yelling as loud as I could!! (If you know my family, I can be pretty loud.) My mom actually completely lost her voice.  It was one roller coaster of a game. 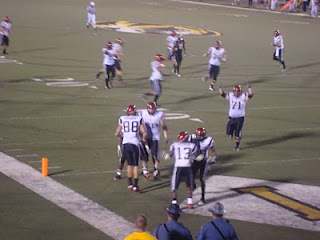 In the end sadly we lost, by three but we showed that we could play!!
I do not think they plan on inviting the Aztecs back to play anytime soon.... 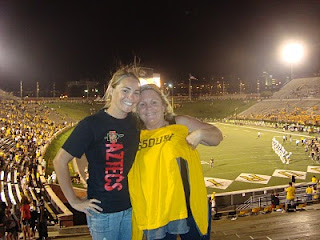 Mom as a Missouri Fan (She is an alumni) 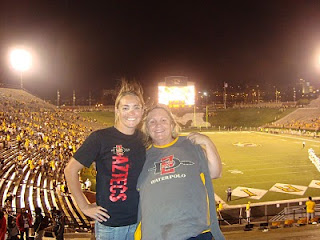 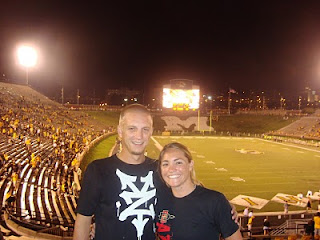 My cousin Ralphie and I!! He was impressed with us Aztec fans :) 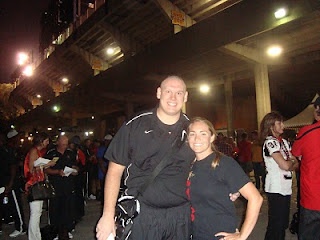 We went and saw Nik after the game. He played a great game!!
After visiting with Nik for about 20 minutes we headed downtown to party it up like my Mom did back in the day.  We had a great time with Ralphie and his girlfriend along with all the Missouri fans and a few Aztec fans.

Sunday:
We took a tour of the school. Since it was still storming out it was a driving tour of the campus. Saw the main buildings of Jesse Hall, the columns and the Athletic Center.. 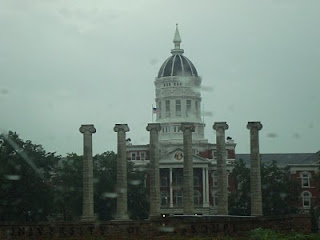 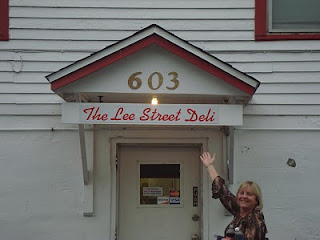 Mom could not believe the place was still there, it is no longer a market but it is still in business serving "Juicy Burgers"

We then went to my cousins daughters Baptism back in St. Louis. We then headed to a BBQ my uncle had inviting all the family over. I got to see all my Aunts and Uncles, Cousins, second cousins.  It was a great time with family!!!

I also decided during this trip, (as long as I can afford it) I plan to attend at least one Aztec home or road game a year. And bowl games are a given!!! It was just so much fun and intense!!

I have to thank: mom for taking me on this trip.  I had such a blast.
Only way it could have been better was if the Aztecs had gotten a 'W'!!
Posted by Jamie Cassidy at 12:13 PM No comments:

So my life may consist of being out of the pool these days.. Only in that I don't spend hours on end following the black line, getting the huge tan circle on my back, or wondering if my arms will be connected when practice finally ends.. However when you have done something your whole life its a weird feeling when it all of a sudden just ENDS!!
My swimming career ended at the 2009 MWC Swimming Championships with the mile.. I remember it like yesterday, I had 66 laps to let it all soak in.. My collegiate career was ending with every stroke. Then I finished and I knew it was all over.  After touching the wall, I looked first at my sister Brooke who is not only my best friend but my teammate. 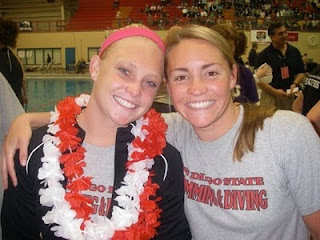 I then looked up in the stands and saw my parents.  Who I want to thank so much for the early mornings, long days, and unwavering support of my waterpolo and swimming career. 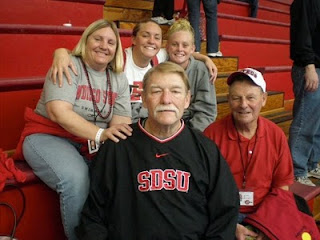 Taking one more look at the pool and the clock, I climbed out. And then started thinking what do I do without the black line to follow.  It had literally lead me my whole life. That black tile line was my comfort, support, structure and something I had spent hours staring at over the years. I started to wonder could I find my way without it..
It turns out that black line has helped to shape my life.  I have it to thank for many of the opportunities that have come along throughout my life, but especially the opportunities that have arisen in the last year or so. I may not get in the pool everyday and follow that black line. But its a nice felling to know that when I am stressed or just want some time to myself that black line will ALWAYS be there for me to follow!!
Posted by Jamie Cassidy at 6:34 PM No comments:

Life out of the pool.. Is that possible for a Vessey!?

I have started to create a life out of the pool.

Only meaning that I dont stand on the side of the deck in my suit watching the steam rise and the sun come up.. Thinking do I really want to take the plung.. NOW I get to stand on the deck as one of the coaches at San Diego State University.  I stand in all my warm clothes and remind the girls that the pool is not getting any warmer, so you might as well just take the plung!!  I guess I was not ready to leave the pool completely, or being an Aztec!!
The Link to my coaching profile: http://goaztecs.cstv.com/sports/w-swim/mtt/vessey_jamie01.html
The Link to the team (feel free to follow us) http://goaztecs.cstv.com/sports/w-swim/sdsu-w-swim-body.html
Posted by Jamie Cassidy at 11:37 AM 1 comment: 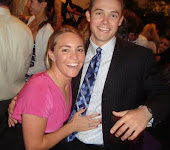